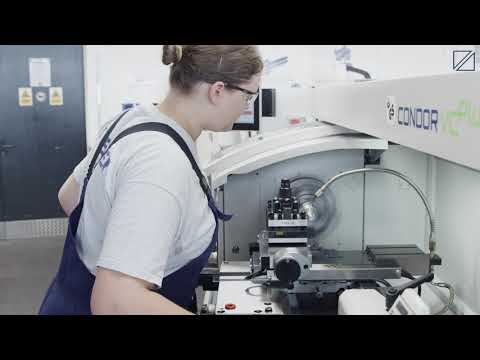 WEILER: Precision and quality for over 80 years

WEILER's wide range of products includes conventional, cycle-controlled and CNC precision lathes for one-off and small batch production in numerous industries where flexibility and maximum precision in workpiece machining are of primary importance.


WEILER is represented in all industries, in in-house and inter-company training centres, in general mechanical engineering, in the optics and aerospace industries, in energy and medical technology as well as in tool and mould making, to name but a few. Recently, the product range has also been supplemented by a completely newly developed 4-track precision lathe with cycle automation. Radial drilling machines complete the product range.

All products are manufactured in Germany at the Emskirchen site and promise the highest precision in workpiece machining. The company has manufactured and sold more than 160,000 machines since its foundation in 1938. In addition, it set a milestone in the industry with the development of the first cycle-controlled precision lathe in 1989. Today, WEILER is the market leader for conventional and cycle-controlled precision lathes.


Manufacturing "made in germany"

Around 550 employees produce at the headquarters in northern Bavaria and at a second production site as an extended workbench in Holoubkov, Czech Republic. The 14,000 square metre headquarters combines sales, administration, research and development, a production hall, two assembly halls, an air-conditioned measuring room for quality testing, a paint shop and shipping. WEILER thus controls all work steps along the entire production chain and can thus consistently enforce its high quality standards. In-house research and development are core areas of the company that make an important contribution to WEILER's innovation leadership in the market.

Our own international service network, consisting of central contacts in Emskirchen and employees on site, guarantees the rapid maintenance, repair and overhaul of WEILER precision lathes worldwide. Within the framework of the partnership with WEMATECH WMS GmbH, machine tools and special machines of all other makes can also be repaired and generally overhauled.
A worldwide network of support points ensures short distances to the customer. WEILER covers a large area of the markets with numerous sales partners in Europe and worldwide representatives. In addition, the company is represented in the USA by its own subsidiary, WEILER North America Corporation.

The family business, founded in 1938, is managed by the managing partners Dkfm. Friedrich K. Eisler and his sons Alexander Eisler, Finance, and Michael Eisler, MBA, responsible for Sales, Service and Marketing. Dr.-Ing. Andreas Wende is responsible for the technical area as Managing Director.